The foundation of Estremoz

From whichever direction you approach the town of Estremoz, the skyline is dominated by its castle and the surrounding medieval town walls. In the largely flat terrain of the Alentejo, you can see why the town has always been a place of strategic importance—set on two important trade routes (Faro-Guada and Lisbon-Madrid) and being close to the border with Spain, Portugal’s age-old enemy.

My first ever visit to Estremoz was in the early 1980s and I remember it to be an authentic if somewhat scruffy and run down place, and the castle area was definitely not a part of town I was drawn to. Things have improved a lot since then and today the castle is home to a very plush pousada hotel.

Estremoz received its first charter as a town in 1258 from King Afonso III, who ordered the building of the castle and the inner walls in 1261. His son, King Dinis made improvements to the walls adding two gates on either side of the compound: Porta do Sol (Sun gate) and Porta de Santarém (Santarém gate), and was the first to build a royal palace on the site, with the later, defensive outer walls being built in the 17th century.

Among the illustrious inhabitants of the castle have been Nuno Álvares Pereira and his troops during the Battle of Atoleiros (1384), King Pedro I (known as Pedro the Cruel) and the Holy Queen Isabel, wife of D. Dinis and famous for the miracle of the roses among other acts of benevolence. 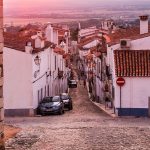