When we decided to move to Estremoz and make our home on the outskirts in a place called Ameixial, we had no idea that an important battle had been fought right on our doorstep. We were even more surprised to find out that the battle of 1663 was led by the Duke of Schomberg and included a couple of thousand English troops in Estremoz.

Portugal had been at war with Spain for 20-odd years following a rebellion against Spanish rule. Due to other military commitments  both sides were underfunded and the war so far had been mainly raids and skirmishes across the border and nether side had made much headway. However, after the Peace of the Pyrenees in 1659, ending the 30 Years War, France abandoned her Portuguese ally, although there were many advantages to keeping Spain tied down. So Marshall Frederick Herman, the Duke of Schomberg, was sent as military advisor to Lisbon by Louis XIV with the secret approval of England’s Charles II who was still living in exile following the English Civil War.

Louis XIV’s decision to send Schomberg to Lisbon was to prove good news for Portugal. Schomberg was an experienced military general—one of the best of his time. He had spent the past 10 years fighting for the French against Spain in the 30 Years War, and once appointed for service in Portugal many French officers and men he had served with offered themselves for service to Portugal under their much-respected general. In all this meant a body of 1,800 fighting men.

Schomberg arrived in Portugal at the head of the French troops in November 1660. His mandate was to exercise command of the forces in the Alentejo, as well as reorganising and retraining the whole Portuguese army. He received the title of ‘Maestro de campo General’, roughly translating to Lieutenant General.

Portugal had been in talks with England for a marriage treaty for years and now was the ideal time. Charles II had returned from exile to be officially crowned king of England. He was short of cash and constantly being pestered by his mother and cousin Louis XIV who were trying to turn him to Catholicism—so a Catholic wedding to the daughter of King João IV of Portugal, Catherine of Braganza, was arranged.

In the terms of the marriage, Charles received £500,000 sterling, ownership of Tangier, the islands of Bombay and trading rights in Brazil and the East Indies. In return, Portugal would receive military support from England.

Schomberg met with Charles II and advised him to send troops from Oliver Cromwell’s recently disbanded New Model Army, who were the best trained and experienced soldiers he knew. So a force of 3,000 men was assembled made up of 2,000 foot soldiers and 1,000 cavalry.

The English troops arrived in Lisbon in June 1662, with the bulk of the brigade marching directly to their quarters in and around Estremoz arriving in early August.

They would soon see action the following year at the Battle of Ameixial. 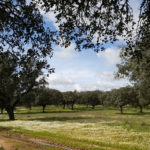 Visit to the dolmen at Pavia, Alentejo